Showing posts from January, 2020
Show all

In the Meadow - Below Bergen Peak 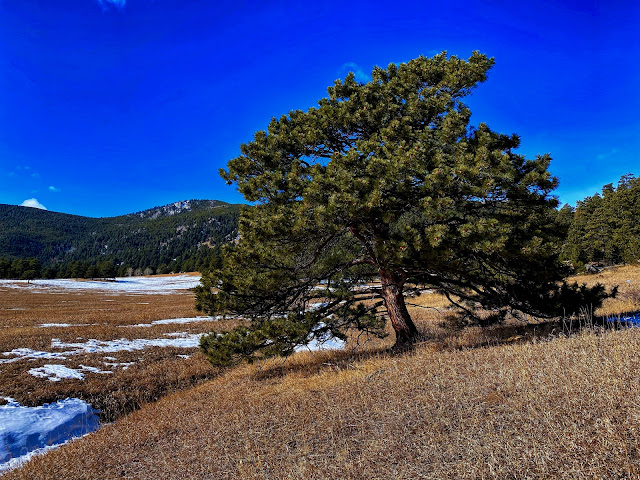 Below Bergen Peak It is a brisk sunrise in the meadow below Bergen Peak where the solemn monarch presides over the forlorn foothills. Scattered haphazardly across the golden field, ponderosa pine are lonely sentinels overseeing any approach. After a month of mild weather, most of the snow has melted but there are a few drifts that still survive in the shadows. On this clear winter morning, wispy white clouds are blown across a cobalt blue sky. The muddy trail, set upon a tilted plain, is a gradual incline that is quite grueling to traverse. While the scenery on this day may not be so spectacular, the sleepy landscape affords some serenity in order to recharge the soul for another year. Snow drifts survive in the shadows Wispy white clouds A grueling traverse A sleepy landscape Serenity to recharge the soul A solemn monarch Lonely sentinels Ponderosa pine
Post a Comment
Read more 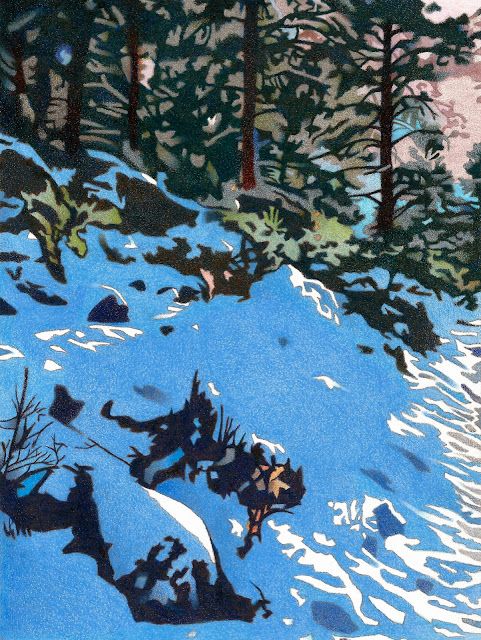 "In the Forest, Fillius Ridge" Colored Pencil It is the middle of winter in the Colorado foothills and Fillius Ridge is the spiny crest of a steep, forested hillside. The rugged scene is another study in contrast involving opposing shapes, edges and values. The forest interior during the winter is one of the most austere places on earth erecting a severe barrier from the rock, ice and fallen lumber found in a forbidding wilderness. Life is a struggle on the lofty rim where plants, trees and animals struggle to survive this season of gloom. The flickering landscape makes a gradual transition towards abstraction as the indistinct edges of the lodgepole pine melt into the morning sky. The dark mood is alleviated by a trickle of pink light that gradually seeps through a web of tangled branches and needled foliage. It is a natural patchwork of analogous colors where white highlights streak across the cliff’s snowy surface. The sharp angles of the deep, blue shadows conv
Post a Comment
Read more 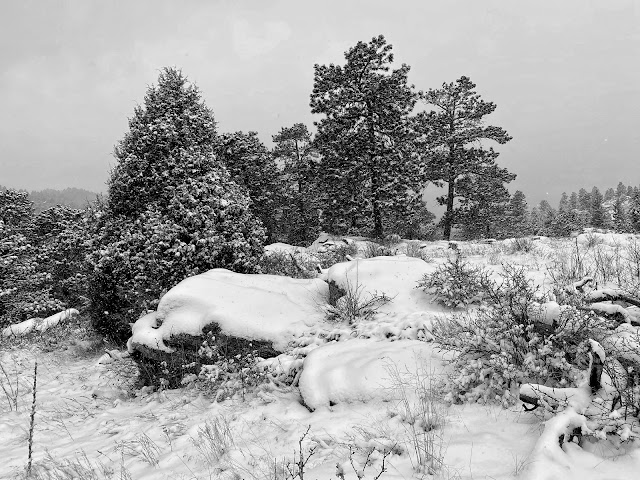 Winter Storm Gage Right at the start of another decade, a named storm descended onto the foothills, dumping heavy amounts of more snowfall. Winter Storm Gage cruised down through the corridor, eliminating any hint of color while leaving behind a landscape converted to gray. Trudging up a steep hill was a struggle but I did witness white flakes falling against the black trees, creating a soft, artistic effect. There was so much contrast between the two values, I felt like I was walking through a pointillistic painting. A few snags and fallen logs were representative of the rough life endured by the trees and animals that survive on Elk Ridge. From a high overlook, most of the valley was visible but the horizon line was lost due to the dense atmosphere. Working my way back down was a bit dicey because the trail was broken by rock, slush and ice. Back down at the bottom, a miserable wind made everything cold and uncomfortable but despite the bad weather, I can’t think of a bett
Post a Comment
Read more

Christmas in Western Nebraska - Calm Before the Storm 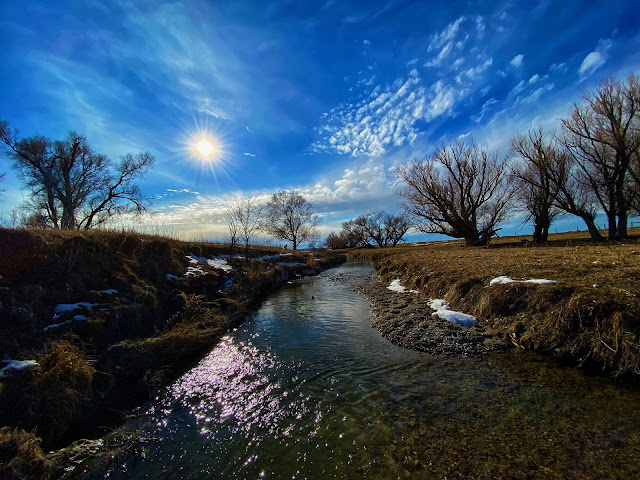 Christmas in Western Nebraska Christmas in Western Nebraska is a bittersweet holiday because the temperatures are always brutally cold. The northern plains normally get pounded by winter storms and a ferocious wind blows snow across the grassland, creating whiteout conditions that make travel impossible. During our stay at my parents’ Little House on the Prairie, the weird weather was unseasonably warm. This December, the usually frozen creek was found to be ice-free and flowing smoothly through a semi-frosted pasture. The cattle had been put out on the corn where the longhorns formed an imposing silhouette against an early sunset. The barren trees stood in stark contrast to the fading, orange light as the entire scene was faithfully reflected on the water’s glassy surface. Our good fortune only lasted for a few days before the peaceful setting was disappointingly shattered. The forecast turned ominous and just as we were leaving town, a surprise storm appeared out of nowher
2 comments
Read more
More posts