Showing posts from 2022
Show all

Lake Marie - An Arena of Beauty

December 05, 2022
Lake Marie, Wyoming Lying north of the border in the state of Wyoming, a graceful wilderness area is known as Medicine Bow. Lake Marie is the elegant centerpiece of this picturesque arrangement of rugged peaks. It’s late autumn and this normally snowy range is illuminated by an impressionistic palette of purple and orange. The high altitude reservoir of rippling water is sparkling blue on this wind-blown morning. Draining out of the tarn, a foamy stream cascades over a steep precipice and flows through a constricted gorge. The lower landscape is blanketed by fuzzy patches of dark forest. The airy realm above is a rocky kingdom composed of sheer cliff-walls that form an imposing backdrop. A steep pathway ascends to the spiny crest where the panoramic views of the tundra are expansive. During this mild interlude between the seasons, activity comes to a halt and a certain calm pervades the environment. The incredibly quiet ambiance only reinforces the sensations experienced when c
1 comment
Read more

November 12, 2022
Poudre Canyon Gashed into the northern Front Range Foothills, Poudre Canyon is a steep drainage that’s as picturesque as it is rugged. A braid of blue water snakes through the tortuous chasm while flowing down to the lowlands. At its most shallow in the autumn, the Poudre River reveals the multitude of rocks and debris normally submerged below the surface. The lazy current and quiet solitude evoke a peaceful atmosphere of extreme tranquility. Sinewy cottonwoods fringe the banks and the golden foliage, flickering in the morning sunlight, is even more brilliant when set against the cobalt sky. The trees cast transparent shadows that sneak passively across the coarse terrain. The gorge is boxed in by steep walls that have been eroded into a spectacular arrangement of jagged peaks, pinnacles and spires. Peering up from within the ravine, the ridge line is described by an impressive, sawtooth profile. A lonely road contours the winding refuge as it gradually ascends the narrow pass
Post a Comment
Read more 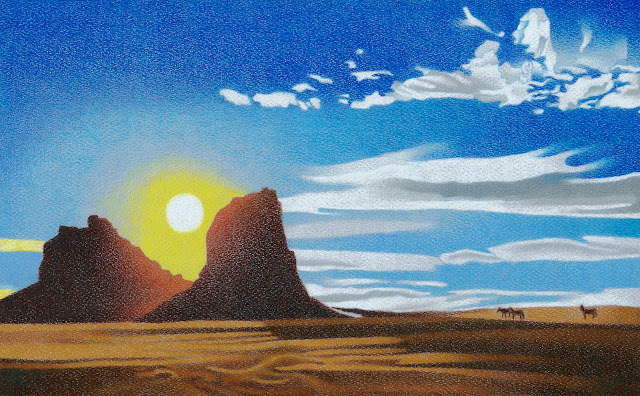 "Prairie Solstice" Colored Pencil Rising starkly above a sea of dried prairie grass, a pair of megalithic landmarks are backlit by the setting sun. It’s the first day of summer so on this special day the solar disk splits the giant rocks, flooding the atmosphere with yellow light. A long, dark shadow is unfurled across the undulating terrain, reinforcing the permanence of the mysterious landscape. Grazing peacefully, a few horses are the only creatures to bear witness to the incredible ambience associated with this yearly event. Citron luminescence radiates into the sky creating a gradient of color that extends from teal to blue-violet. Modulated by soft shading and broken edges, a web of silky clouds is spun across the crystal-clear firmament. It’s an idyllic vision of a peaceful pastureland set in a remote section of the Great Plains. The reticent countryside of rolling hills is a place where the awesome power of nature is unmasked every day. The landscape, weather
Post a Comment
Read more

"Days of Glory" Colored Pencil Drawing It’s the early 1900s and Bridgeport, Nebraska is a fledgling community basking in the sunshine of its glory days. The town is known as “Trail City, USA” because it sits on or near many trails of the Old West including the Oregon, California, Mormon, Pony Express and Sidney-Black Hills trails. Back in 1876, Henry T. Clarke built a bridge across the North Platte River just three miles upstream from the current site of Bridgeport. This overpass improved the link between Sidney and the booming, gold-mining settlements in the Black Hills. The exchange of goods and precious metals between the two regions flourished for about a decade. During that time a loose-knit medley of early settlers established Camp Clarke, a small village located near the river. The actual town of Bridgeport was officially founded as a railway station by the Burlington Railroad in 1900. After the coming of the trains, the population increased dramatically and in 1
Post a Comment
Read more

August 15, 2022
Agate Fossil Beds Unearthed in the panhandle that is western Nebraska, the Agate Fossil Beds are a fascinating monument documenting ancient history. From the associated museum, a steep, 3-mile trail leads up to Fossil Hills where the old dig site can still be seen. At the end of the dinosaurs, 65 million years ago, this area was a tropical lowland and mammals began to emerge. Volcanic activity was intense and a range of mountains started to form in the west while the climate became cooler and drier, transforming the region into a great savanna where immense herds of animals grazed on lush grasses. Common species on the prairie were Palaeocastor - a dry land beaver, Moropus - a distant relative of the horse, Menoceras - a three-foot-tall rhino and Stenomylus - a tiny gazelle-camel. Carnivores evolved to prey on these plains-dwellers the most notorious of which were Daphoenodon - a fearsome beardog and Dinohyus - a terrible hog endowed with bone-crushing teeth enabling it to scavenge
Post a Comment
Read more

July 18, 2022
San Antonio Riverwalk Summer in south Texas is sweltering but if your looking for respite from the brutal heat, the Riverwalk in San Antonio is a historic oasis. The vibrant town center is a melting pot of diverse history, culture and cuisine. Man-made canals branch off from the main stream creating a labyrinth of narrow passageways that circulate through the district. Picturesque bridges built in creative shapes and sizes span the water at convenient intervals. Situated below street level, the tributary flows past shops, restaurants and galleries, offering something for everyone. Statues stand above gardens of exotic flora, filling alcoves that appear at every bend. Steamy mornings on the path are bathed in hazy light and the creek, reflecting the surrounding foliage, is colored green. As the day warms up, the search for shade begins so the buildings’ shadows become comfortable breezeways. The architecture encompassing the area is a curious blend of old and new as glittering s
Post a Comment
Read more
More posts